My friends, hello! You may have noticed that I have been pretty quiet here and on Facebook lately. Part of it is that I am going on my first vacation as an adult here soon (to celebrate my 5 year Anniversary!) and have been stressing and prepping for that.

But also! I have a new pattern that I’ve been working on like a mad-woman, because it has turned out to be my most ambitious project ever – my Joystone Bezel! 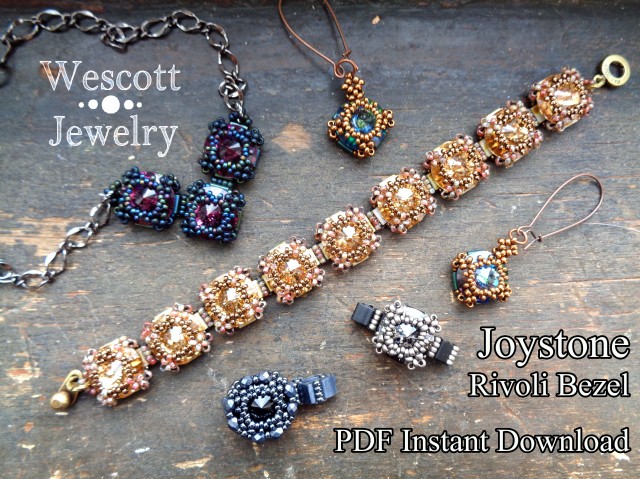 So, this pattern started out way simpler. At first, I just wanted to find a new way of making a bezel for a 14mm Rivoli, because I have a huge stash of them and I hate doing peyote bezels soooooo much. I tried a method using Tila beads as a backing and “prongs” of right angle weave and came up with this ring. 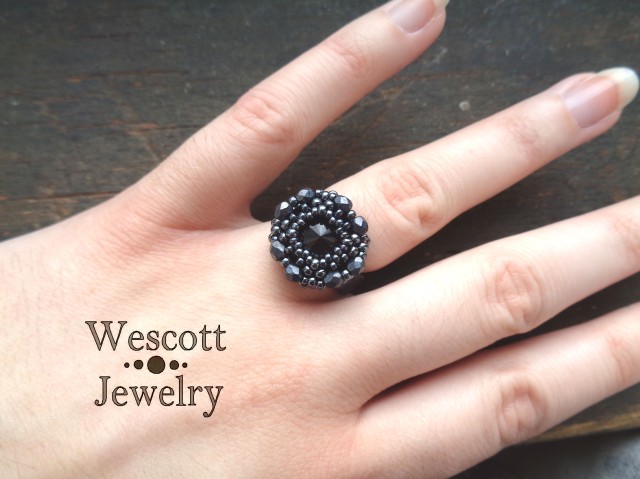 Pretty cute, right? Black and hematite is a classic combo and I thought it worked up pretty cleanly and neatly, so I decided to go ahead and start a pair of earrings. When I got to the step to add the Fire-Polished crystals, however, I realized that leaving the crystals off showed so much more of the beautiful Rivoli. So, I left off that last embellishment step and made these earrings.

After that, I decided to try the ring again, but this time without the crystals and I made this ring with the slightly more pared-down bezel style. 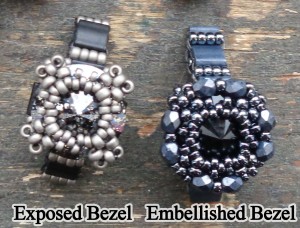 And I liked that too! So, now I had a dilemma. Which bezel should I write the pattern for? There’s only one step difference between the two, so it would be silly to make two separate patterns, but I wanted to make both versions available since I liked them both so much… So I decided to make a pattern that included options for both and called them the embellished version and the exposed version.

After that, I had the idea that if I turned the components slightly sideways (so that it was diamond-shaped, like the earring, instead of square-shaped, like the rings), I could make a cute little “V” motif that would make an awesome little necklace segment and this piece was born. 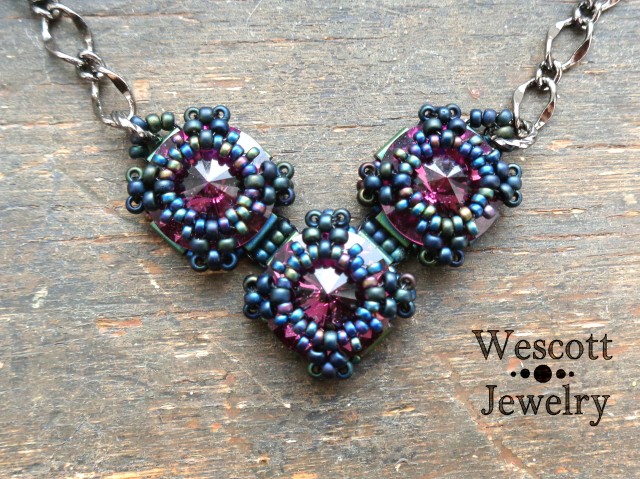 From there, I scheduled a class to teach my new bezel at my local bead shop (the delightful beaders at Beaded Bliss always test my patterns for me before I make them available online) and set to work writing up the pattern. For two different bezels. In three different jewelry pieces. Oy.

Then… I realized that not including a bracelet was just silly. If you made enough components and attached side-to-side, you could have a full bracelet of shining crystals and I was too tempted not to try it. 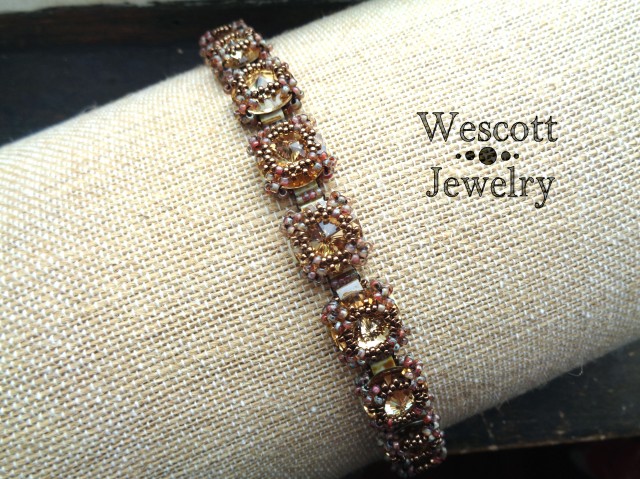 And then I was sunk. I wanted to write a pattern that included two versions of a RAW bezel for Rivoli crystals AND included instructions for a ring, earrings, a necklace segment, AND a full bracelet. I’m exhausted just thinking about it.

I think in total that pattern took me 12-15 hours to write. It’s seven pages and has over 45 painstakingly-drawn digital diagrams and since it includes two bezels and four jewelry pieces, you can get EIGHT different projects from the one pattern. It’s the most ambitious design I have ever taken on and I am so pleased with how it came out and SO relieved that it is finally done. 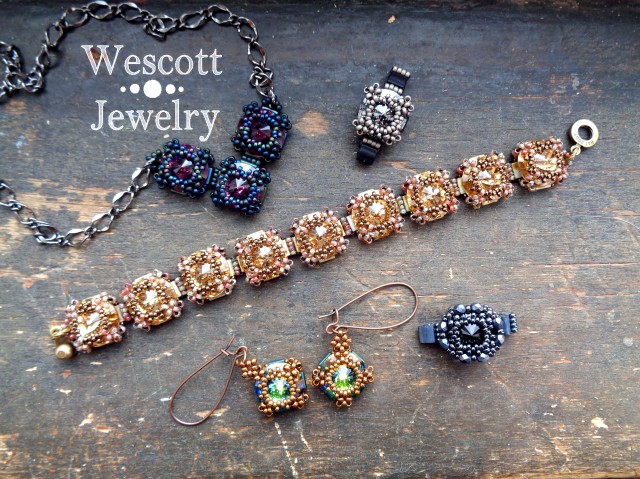 What do you guys think? Which of the bezel and project combos do you like best? Do you think the slightly increased price is fair, since it’s an 8-in-1 pattern? I’ve legitimately got some nerves about putting this design out there since I worked so hard on it.

But now, it is finally out there in the world and I couldn’t be more excited to share it. <3