Guys, I learned a new technique and I think I am in love!

So, last month I noticed a class at Beaded Bliss that I desperately wanted to take. I rearranged my work schedule specifically so I could be there and I learned how to make this!

Ok, so it isn’t supposed to curve like that, but it was my very first one! Trying a new technique is like making pancakes. The first one is always a bit wonky. I think I’ve figured out how to maintain better tension by now. But! Luckily, the weird curve on this one is completely unnoticeable once you put it on your wrist.

So, can we talk about that blue? Those Tilas are Matte Azuro (#4556) and when the light isn’t on them or they are flipped over, they’re a kinda plain smokey gray. But when you flip to that blue side and hit them with the sun, BAM they are the most gorgeous blue. 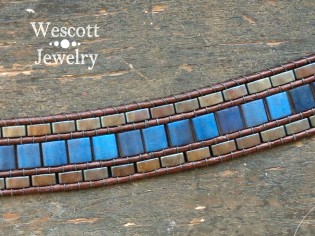 The Half-Tilas I paired them with are Matte Metallic Copper (#2005) and I used a kinda chocolatey brown leather with 8lb Smoke Fireline.

So, the technique involves using two strands of leather, folding them, and then basically doing loomwork with seed beads or two-hole beads, using those strands of leather as the warp. I had never done loomwork before, but it wasn’t as tricky to learn as I thought! 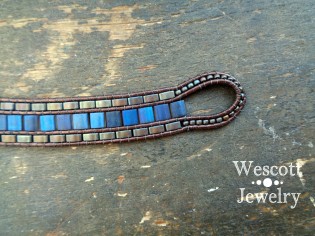 I also had to do some wire wrapping to secure the button to the tail threads, which was WAAAAAY out of my comfort zone. My wire working is abysmal. I can’t even make a wrapped loop, you guys. But Cathy was very patient with me and walked me through it and I think it turned out just fine! 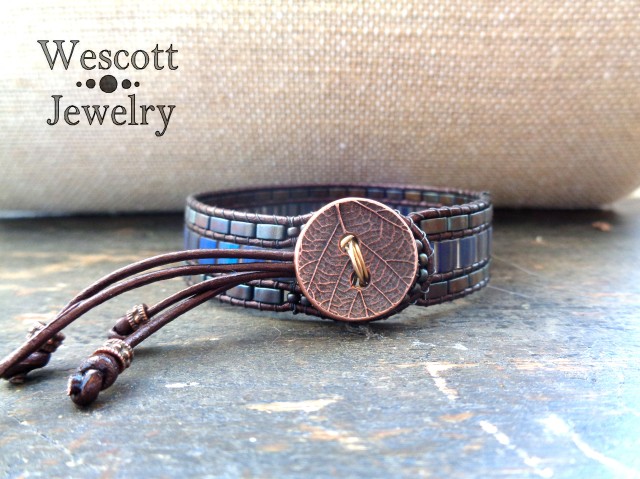 *sigh* I’m in love, you guys. In fact, I enjoyed making this bracelet so much that immediately made a second one!

And look! It is perfectly straight! Ha! So, I used a mix of colors for this one that I already had in my stash. There are three Tila colors (Matte Metallic Copper, Matte Metallic Blue-Gray, and Matte Metallic Green Iris – #2005, #2001, #2008) and there are four Half-Tila Colors (the same three as the Tilas, plus Matte Khaki Iris – #2035).

I did put them in an arbitrary order and stick to it, but because there were more Half-Tila colors than Tila colors, the pattern shifted down as I worked and gave it a more randomized look. I used a silvery-gray leather this time and more 8lb smoke Fireline. 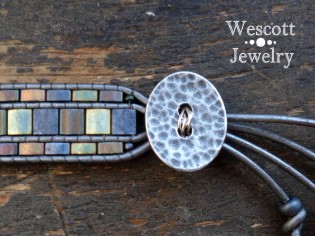 I did ask Cathy to supervise me again when it came to the wire wrapping portion, but I think it went ok! I also realized that I could use 6/0’s as decorations on the end of the strands. They slid onto the leather soooooo much easier than the copper beads I used in the first bracelet.

But, yeah, I can’t get over how well the colors turned out on this one. It’s still got my trademark neutrals and earthtones, but I think the color placement makes it look like some sort of fancy tile work. I don’t know, but I’m enamored. 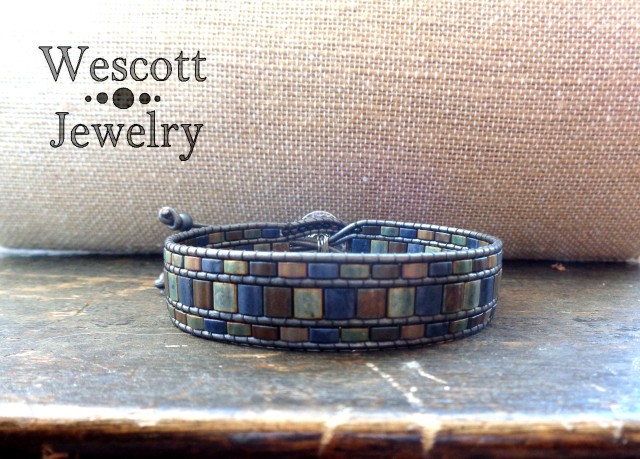 So, that’s what I’ve been working on lately! I don’t get the opportunity to take classes very often, since I’m usually the one teaching them. In fact, I think this was only the second class I’ve ever taken. But I love taking them at Beaded Bliss and Cathy is a great teacher. If you’re in the OH/IN area, you’ve gotta seek her out.

So, thanks for indulging my new obsession! Has anyone else tried any sort of modified loom work like this? Does anyone do real on-loom loomwork? I’m thinking I might need to give it a try!