Hey, guys! Just got a quick post today. Remember back in 2014 when I accidentally bought a huge spool of 20lb Fireline (haha, jk. Nobody read my blog back then!)

I had a bit of brainstorming and made a pretty cuff out of 4mm cubes in a simple peyote cuff. Then a few months later I did some herringbone with 8/0 hex beads. 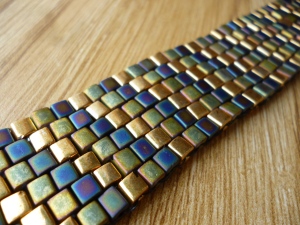 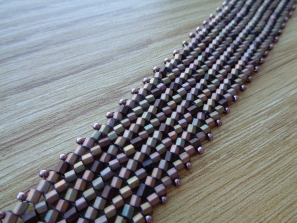 Aaaaaaand then I didn’t touch the giant spool of 20lb Fireline for four years. Oops.

But here I am again and I wanted to fill you in on a few more things that I’ve recently managed to use that super stiff thread to make.

First off! I have discovered that after making a bunch of beaded carrier beads, 20lb Fireline is a great way to string them into a necklace! It’s a thread, so I don’t have to worry about all that crimping nonsense, but it has virtually no slack and lends itself to the stiffer beaded needed to get that nice curve.

But just recently I made a long-chain version with some Delica bead soup I whipped up!

The 20lb Fireline kept that curve nice and tight, which I appreciated.

A few months before that, I fell in love with this Czech glass button and decided to make a turquoise and gold version of my Stash Worm Bracelet to match. I needed to use normal 6lb thread for the embellishments, but for the square stitch base, I used this crazy thick thread and ended up needing to make fewer passes. 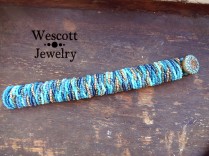 My next project is to take all the leftover DiscDuos and Honeycomb beads that have been left extra after my assorted Demoiselle bracelets. I’ve been saving them up and now I’m gonna string them on my monster Fireline with Toho Demi beads and drop beads to make a wrap bracelet. I haven’t finished it, but I’m excited to use up these extras and make something pretty!

Slowly, but surely, I am finding ways to use up this crazy stiff, annoyingly thick, can-only-be-used-with-a-Big-Eye-Needle gosh-darned thread. Do you guys have any more ideas for me? Someday, I will defeat this spool!